New Years Day and A Year in Latex Enclosure

Well, it is Jan 1, 2006 and I have now been fully encased in latex, 23/7, head to toe, for one full year. I never really expected to make it this long. I thought that some skin problem would develop, or I would become unable to remain rubbered, or Sir would lose interest in me as a rubber enclosed sub. However, the opposite has emerged as the truth.

I wrote a few weeks ago that I thought I would want ever more extreme bondage and restriction, more encasement and deeper dissolution into the latex. Well, while I willalways want those things from time to time as my desires and needs fluctuate, I think I have now found precisely the level of total submission to the discipline of latex and to my Sir.

I certainly look forward to days spent in total immobilization, bodily functions controlled and managed by others such as Sir and maid, but for day to day life, I am happy with the skinsuits, catsuit, hood, gloves, corset, and boots covered by dress and maybe a neck corset, then the burqa to protect me from prying eyes when in public.

Sir seems to agree. He has explained to me today that I will continue my usual protocol for the time being. He understands and agrees with my desires for more extreme restriction, encasement, breath and bodily function surrender, and assures me that I will be allowed to experience and endure such extreme sessions. However, he wants me to remain communicative, involved with the outside world, and generally compos mentis for a while longer.

The mode of thought I achieve when totally encased and isolated, suspended and ignored, like a garment hung on a hanger, is almost transcendental. I am sure many of my readers will understand the absolute zen-like drfiting of the mind that one undergoes after a few hours sealed, gagged, tubed, suspended, and ignored. Then, the shock of being stimulated comes so much more intensely that there becomes nothing in the universe except the stimulation that is happening right then. Talk about living in the now!

Sir is probably right. I could probably not withstand the onslaught of non-consciouness that would engulf my ego and my self if I were to dissolve myslef into latex encapsulation at the level I intended. I would, most likely, simply cease to be as a human being separate from the latex that compels me. of course, that is what I want in some respects, but perhaps not yet. It is a one way journey I think and Sir has deisres for me as me yet.

But can you imagine, an old crone in her 80's or 90's, still encased and sealed, completely without mind, perfectly sculpted figure (since all is held in place by rubber), enjoying one melting orgasm after another as she continuously dangles from a ceiling suspension rig, on full life support, no thought or substance in her mind, just drifting on a pleasant raft of sensation to her ultimate end? mmmmm...yummy, do you not agree, dear readers?

We had a lovely new years eve, went to a play and a kinky after party and I had a great deal of fun. I remained gagged and burqa'd throughout and had the opportunity at the party to submit to several folks. Interestingly, the most common form of submission my temporary owners wanted was for me to kneel, bow my head to the floor and then crawl to them until my head touched their feet. After the first time I did this for Sir, just after we arrived, there were three women who wanted me to show such obiesance to them. It was hilariously funny to them, lusciously humiliating to me and incredibly arousing to Sir.

Hope everyone else had a wonderful new year's eve and are looking forward to a great 2006. Certainly, I am!

> But can you imagine, an old crone in her 80's or 90's, still encased and sealed, completely without mind, perfectly sculpted figure (since all is held in place by rubber), enjoying one melting orgasm after another as she continuously dangles from a ceiling suspension rig, on full life support...?

I certainly can imagine that. In fact, I imagine similar situations often in my fantasies. I'm a male who likes to be encased and controlled just like you do and I've had that pleasure on a number of occasions. I'm not 24x7 as you are, but I do like the thought of going there at some point, even though I agree that my sentient, conscious self would soon be lost in pure animalism.

I wish you and Sir a great 2006. I can only imaging the intense and beautiful experiences that await you in the new year. I greatly respect the awarness and self-knowledge that you and Sir bring to this next phase.

I also admire your desire and intention to go deeper into the trip. Thanks for sharing your experiences.

p.s. I can understand the zen aspect of the encasement that you propose and intend to experience. Yummy indeed! You are truly a pioneer rubber psychonaut! An insperation to me.

I can understand that you are concerned about totally "drifting away" once you would realize your deepest fantasies. But please continue to share with us, what you do experience if you like - including those experiences that are really on the border line.

thanks for keeping this the most interesting blog I have ever seen.

Will you bow and crawl to me? Yummy! LOL! BTW I am talking to the magazine editor and he has some concerns thus why you have not reiceived the questions. Also if you see my blog on yahoo youll see youve been tagged. Ill say no more here. Happy Anniversary!

Everyone
Thank you for the kind words and wishes.

Happy New Year and have lots more enjoyment from your enclosed lifestyle and from allowing us a glimpse of it. I think you're fantasy about "where will it all lead to" must be one shared by many who begin on the road of submission and erotic sharing. I found the film Realm of the Senses very compelling in the way that the couple seemed to melt inevitably into the final release, but unlike many similar love stories it seemed to be driven more by their own passion rather than the pressure of society. Shocking, but far from tragic.
I look forward very much to more of your wonderful blog. Warm regards, K

I have been following your blog for about a month and check it everyday for anything new. I would love to be able to be in your postion it is the ulitmate place to be.
I would really love to hear more about your ideas of total enclosure and being confined more often in small places IE a cage or cell or being put in vert restrictive bondage for long periods.
I am really enjoying this and look forward to more blogs and lots of clothing details.
Have you ever thought of going out chained or handcuffed ?
I have been a rubberist for the past 40 years and every chance I get I mulitlayer but I am only able to last about 5 hours because of the heat.
I have 2 rooms in the house for lock down but I have to do it my self because my wife is very tolerable but dosn't want to take part in that side of my life.
She will however wear the leather cloths out and dresses very nicely in leather most of the time.
She is not interested in latex but allows me to wear it anty time I wish.
I jave on occasion tried to sleep in it but I not been able to get through the entire night.
My fantasy is to be locked down 24/7 but I you seem to ahve accomplished it very well.
Please try to write more often I think living through your thought and experiences is keeping a lot of us going.
Thanks
Cynthia

have you ever considered keeping it pitch black in your bathroom when you bathe? That way no one, not even yourself or maid would ever see your skin without latex? I'm sure it would take a while to get acustomed to bathing without being able to see, but blind people do it.

In referance to the comment about bathing in total darkness, perhaps instead a blindfold? That way you yourself would not ever see yourself unencased. Just a thought

Dear covered sister, congratulations on one year covered.
Have you ever taken a shower while wearing a latex helmet with no eye openings? It is excitingly disorienting!! But don't do it alone.

Last Saturday I was taken out in my new black burqa, suitably gagged & chained underneath of course. We spent several hours at the Mall & yes, dear latex lady, I walked 2 paces behind Master at all times. I was also required to kneel by Master's chair in full public view at the Food Court while he had lunch with friends. I could see the contempt in many womens' eyes when they looked at me. So deliciously humiliating!

Happy New Year and first anniversary of your 24/7 latex lifestyle. I have been following this blog since the beginning and found it to be a great inspiration to me. It motivated me to push my previously add-hoc attempts at living / working in rubber to a whole new level. Although not anywhere near your intensity, I am now in rubber as much as is practical for me (often every day for most of the day) and am achieving higher levels of comfort and ability to function in rubber than I would have thought possible a year ago.

Along with increased practicalities I am achieving a whole different type of sensual experience than I did when used to stripped after just 4 or 5 hours. Then there is the satisfaction of encasement, devotion and sacrifice for the rubber skin and even the change in personal body image – I could go on but you probably already got the point. All these things and more that I now have are partly down to reading your blog and being encouraged to at least try to get close to living my fantasy. Thankyou.

I look forward to the next year,
Sealed

Have you disappeared or are you in so much rubber bondage you can't communicate ?
I really miss reading about adventures!

Congratulations, you made a full year. You are amazing. 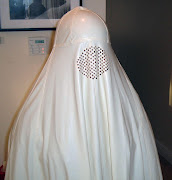 Some Things About Me

Latex Lady
You can email me directly if you wish to know where my burqas can be acquired.

I ignore any request which has no profile, or no picture. I like making friends, and wish that to be reciprocated by my friends

I am on webcam on Yahoo Messenger sometimes but cannot say when.

I am a lifestyle submissive latex fetishist. I am married, bisexual, a PhD, a mother and I now live a rubber-centric submissive lifestyle 24/7; a longtime dream of my Dom husband's and mine.

For that year I did not see my own face or body nor did my husband, family or friends, without a mediating layer of latex. It was a very bizarre and fun year.

My base wardrobe consists of transparent 'skinsuits' that cover me completely including hood, gloves, and feet, then undergarments including corsets, usually an opaque catsuit, and/or a dress of soft latex.